As you get started on your journey, you will be faced with a few decisions. This section will cover the first of those decisions.

Your choice of client will affect how you view, and play the game. You are free to switch so long as you have both installed on your system.

The original client used to play Ultima Online. Less features than the Enhanced Client, but preferred by many longtime players who favor its simpler nature.

This is the alternative improved client of UO, it includes:

In Ultima history, a powerful artifact known as ‘The Gem of Immortality’ was shattered into many shards. These shards make up the universe of Ultima Online, with each one being represented by a different server. 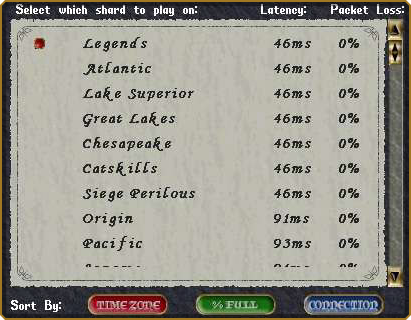 Each shard shares a common history up until the point when the Gem was shattered (as to that point there was only one world and not multiple shards). From that moment, their histories diverged and each became home to their own unique people, places, and traditions. There are different guilds and different player organizations on each. Do some research on the shards and read up on the recent events hosted by the in-game Event Moderators.

Each race has their own set of special abilities (in addition to differing physical appearances). They also have access to different types of weapon, armor, and clothing. Following is a brief description of each:

The first playable race in Ultima Online. Humans naturally heal faster than Elves and Gargoyles and are more adept at basic resource gathering and can carry greater weights. Most significantly, they have the “Jack of All Trades” trait, which provides them a “hidden” minimum of 20 skill points in all skills – even ones they have not trained past 0. Humans are the most widespread race, with kingdoms in Britannia and Tokuno, as well as towns in Malas and the Lost Lands.

The Elf race hails from Heartwood, and their lives are tied to the wellbeing of all of Sosaria. Due to this Elves are more in touch with nature, granting them a greater ability in locating special resources. Their wisdom imparts an automatic increase to their total Mana as well as a higher natural resistance to energy-based attacks. They also have a higher ability to move without being tracked, and are better able to detect others who are hidden. They also have better eyesight in the darkness, meaning they do not have to make use of the “Night Sight” spell at nighttime or in dungeons as Humans and Gargoyles do.

Though only recently introduced to UO as a playable race, the Gargoyles have a long history in the Ultima franchise. The Gargoyle home is on the Ter Mur facet. Due to their size, they are not able to ride mounts, but instead rely upon their wings for quicker transportation (see section five for more details). Gargoyles are fierce warriors and are able to do greater damage as they take more damage themselves. They also have greater ability in the Throwing and Mysticism skills, and are more adept at Imbuing weapons with magical properties. 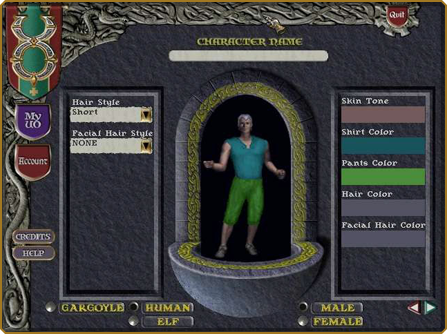 There are few major differences between the genders. There are some armor and clothing pieces that are gender-specific, and some mounts can only be ridden by one gender or another.

There are a number of options for each of these traits, all of which can be changed later on during the course of play. Starter clothing provides no protection against attacks, but is provided for modesty’s sake. Gargoyles have the options for different styles of horns instead of hair.

Your name will communicate a lot about what type of player you may be, think carefully before selecting one!

There are many different skills in Ultima Online. You are free to mix and match different skills on a single character – you could have a warrior who dabbles in alchemy, a mage who is also an accomplished blacksmith, or a bard that has the uncanny ability to always reel in the “big one” when fishing.

To start, you are presented with pre-selected skill sets that suit a particular type of character. Choosing the “Advanced” option allows you to pick three starting skills and adjust their level as well as the level of your starting Stats (Strength, Intelligence, and Dexterity). The starting items and skills you receive are determined by your choice on this screen. 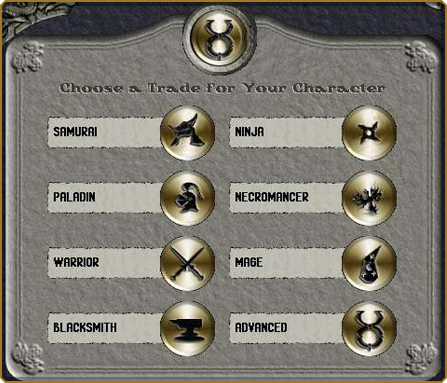 Your final step in the Character Creation Process is choosing a city to start in. Select either the Trammel or Ter Mur facets at the bottom, and select each town to read a description of them before making your choice. Travel between towns is usually accomplished via permanent town moongates. 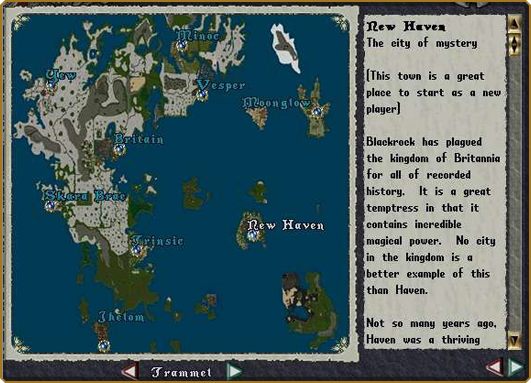