The Town Crier, issue I

The City herald has a new task, selling newspapers. Listen to his tale of recent events and buy the newspaper he is selling (context menu) 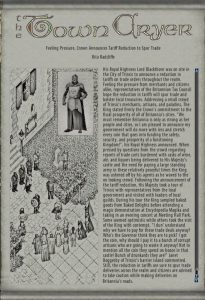 A tariff reduction to spur trade sounds interesting, an opportunity to boost the coffers of the cities.

But what is this?  Perhaps not every reader of the news is an honest trader. 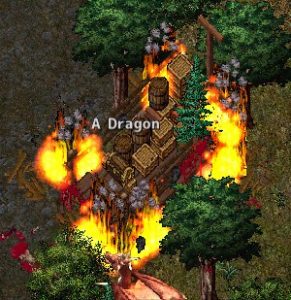 Some of the ambushers seem to have interesting items in the inventory, each needing a specific skill to discern its properties. The information thus revealed, however, merely deepens the mystery. What could be their purpose?

A daemonic amulet – Magery
The amulet bears a large pentagram hanging from a series of interlocking beads. Small bits of daemon flesh grind between the links as you manipulate them.
An oddly modified gorget – Blacksmithing
The gorget appears to have been modified to fit the neck of a large creature. There are chafe marks scarring the interior showing signs of struggle against it by the wearer. Large rings stud the circumference of the gorget.
A mysterious rolled map – Cartography
The map shows the location of several locations throughout Britannia, but none seem to stand out as noteworthy.
A soul trapped within a phylactery – Necromancy
A tool used by those wishing to entrap the souls of the undead and command them to do their bidding.
Blackrock Staff – Blacksmithing
The staff is of standard build and dimension, however the material seems to be strikingly familiar to what you know as blackrock. To your knowledge the material is incredibly unstable to work with. Whoever made this has had otherworldly training in its manipulation not known to current Blacksmithy techniques
Boline – Swordsmanship
The crescent blade is crude but you surmise is formidable for performing intricate engraving work. The tip is stained with the shavings of wax and soft metal.
Dried Incense – Alchemy
The strong smell of sage and deadwood emanates from the bundle.
Folded Stole – Tailoring
Often used during official ceremonies and ritual this long flowing vestment is worn draped over the neck and is embroidered with pentagrams at either end.
Goblet – Tinkering
The goblet is relatively unassuming. The interior of the pewter cup is stained a deep ruby. An etching of a pentagram decorates the base.
Pentagram adorned wand – Armslore
The wand is pretty standard among other wands you may have seen. The twin shaft is made of cedar and is crested with an intricate pentagram made of etched rock, inlaid with blueish crystals
Ritual Tome – Spirit Speak
The large tome is adorned with a pentagram, not uncommon to many arcane items found throughout Britannia. There appear to be pages upon pages of ritualistic instructions and incantations, none of which are in a familiar language.
Scourge – Provocation
Not unlike tools used to provoke a response from an intended victim, this whip is studded with beads of hard rock. The leather is stained deep red from repeated self use.