Remove trap is a skill used to remove traps on containers and disarm floor traps in various locations. Until publish 105 there were ‘qualifying’ requirements which must be met before the skill could be trained, these have been removed; as a result it is now possible to purchase the first few points in training, though you will still need detect hidden to find floor traps such as those in Underworld. Using this skill will not cause a hidden character to be revealed

To use the skill target the floor trap you have found or the box, crate or chest you believe to be trapped. Be sure to have the means to repair any damage you may receive, if you fail to remove the trap there is a high probability that you will trigger it instead!

There are four main methods of training the skill

Bought from the Oddities Trader at the Lycaeum in Moonglow

, these come in 3 types, the circuit trap, the cylinder trap and the slider trap; they will not penalise a failed attempt. Use the skill on the box to bring up the puzzle to be solved. 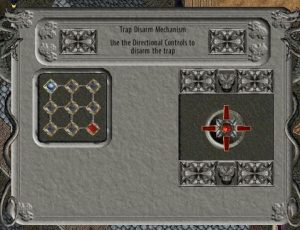 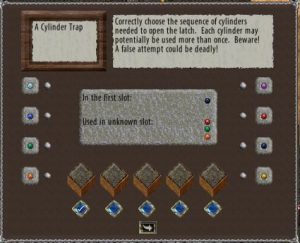 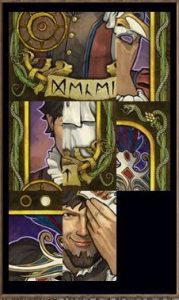 These give the best gains, but require a treasure map to be dug up. There is no minimum requirement for the different chest levels, instead the length of the process is variable based on the player’s Remove Trap skill, with higher Remove Trap skill requiring less disarming time. During the disarming process Ancient Chest Guardians, chosen from the monsters that can spawn during the initial dig, will spawn to defend the chest, accompanied by some fire damage to the digger and any nearby party members. These monsters will not drop any loot and must be defeated before the chest can be opened.
If the player moves more than 16 tiles away from the chest or is killed during the disarming process, the process must be restarted. The disarming process begins when a player uses Remove Trap on the chest.

3. Chests in towns and dungeons

A dangerous pastime, these traps are of three types, dart, explosion or poison and of varying difficulty, a Crystal Ball of Knowledge will help you know whether the trap you have found is of the right level for your skill. This is obtained from Ortlem The Mystic in Ter Mur, Royal City. An excellent training location for this skill, detect hidden and lockpicking is the hidden room at Britain Warrior’s guild. The large, square boxes are all locked and trapped and span a wide range of difficulty levels. Higher level traps will do more damage, or have higher level poison, if (when) you fail to remove them. Know where the nearest healer is in case of fatality. This method uses carpenter crafted crates or boxes but is slightly problematically as the tinker placing the traps must be quite close in skill level to the treasure hunter removing them, necessitating training both skills, though this need not be on the same character.