The Huntmaster at the Skara Brae Ranger’s Guild offers a monthly challenge for hunting various species throughout Britannia. The Huntmaster can be found here Obtain a hunting permit from him using his context menu, it will cost you 5,000gp, the funds must be available your bank box. 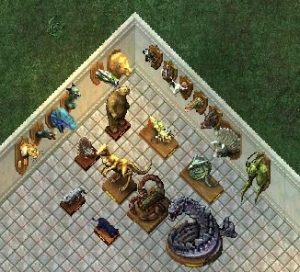 You will see examples of the creatures to hunt arrange around the guildhouse, here’s a list:

This listing has been extended again, publish 95 late 2106

Double click on the hunting permit and target the corpse of a valid species to record the kill.

A skilled carpenter with a taxidermy kits can use your hunting permit to create a trophy for display; tiger trophies created from kills after publish 98 will match the color of the tiger killed. The permit is not consumed in this process.

Return to the Huntmaster to submit a kill for consideration in the monthly competition. Do this by dropping the permit on the huntmaster. If you are lucky you may see this message: Sadly, instead, I saw this:

If a submission has the greatest measurement for a species, the kill will be displayed on the trophy inside the Ranger’s Guild. If a submission ties the greatest measurement for a species the display on the trophy will not update, however the submitting player will be eligible for reward when the contest concludes each month.

If a submitted kill has the greatest measurement at the end of the month, the submitting player(s) will get points for each submission to redeem rewards from the Huntmaster.

Kills can only be submitted from the current month and year.

The Huntmaster’s month will be updated on server maintenance, each new month the contest will reset.

Rewards can be redeemed by double clicking on the Huntmaster, and include (updated publish 106, late 2019):