Money makes the world go around, so they say, true even in Ultima Online. The common unit of money is the Gold Piece, usually referred to as ‘gp’.

The simplest form of ‘money’, gold coins are found as loot on most monsters and can be earned by performing escort quests or selling items to NPCs, although if you lack the carrying capacity in your pack, either because of item count or weight restrictions, the gold will be credited to your currency account instead of falling into your pack.

Most transactions, such as insuring your armor etc and buying from town shops or player vendors, will take gold directly from your currency account and will ignore any gold in your back pack, however when paying NPC’s for training (drop the amount they ask for on their heads) and for some quests you will need the gold in your pack. Gold coins can be withdrawn from the bank by saying ‘withdraw [amount]’. When withdrawing gold you will need to take into account the weight, each 150gp, or part thereof, weighs 1 stone; 151gp therefore weighs 2 stone, 300gp also weighs 2 stone, but 301gp weighs 3 stone.

When gold coins are dropped in the bank box, sent to the bank via a bag or chest of sending, or deposited by selecting the option ‘Make Deposit into Currency Account’ from the Bank Actions Menu, accessed through the option ‘open bankbox’ on the banker or minter’s context menu, the coins disappear and the amount deposited is added to the currency account total.  This is a ‘joint account’, all the spendable gold of all the characters belonging to a particular game account on a specific shard is in this account, it is this currency account total that is shown at the top of the bank actions menu. You can also see this total by using the command ‘balance’ to a minter or banker in any bank. 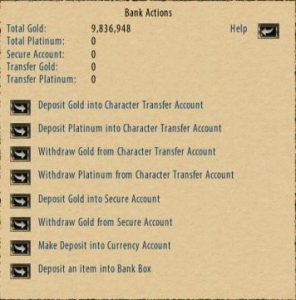 The picture shows three balance totals. The first is the currency account, referred to above, but the Transfer and Secure accounts are per character. Any currency that a player wishes to transfer to another shard must be placed in the character’s ‘Character Transfer Account’. This is done through the Bank Actions menu. Using the verbal command ‘bank’ does not open this menu except in the case of Endless Journey accounts. Deposit gold and/or platinum into the transfer account, which will deduct that amount from the currency account total. On reaching the destination shard the transfer sum will be automatically added to the currency account of your characters on the destination shard.

Each character is also able to put funds into a ‘secure account’. Using the option ‘Deposit Gold into Secure Account’ will deduct the amount from the group bank total. Funds from this account can be put into a currency wall safe in a house, either yours or a house you are friended/co-owned to, provided the security setting on the safe grants you access. Any character with the correct access can withdraw the funds from the safe into his/her own secure account. Use this feature to transfer funds to players who are offline or to your own alternate account if you have one.

This item is crafted as a deed by a tinker and can be placed in a house you own or are co-owned to. Security on the safe is set as with a normal container, but with slightly different options 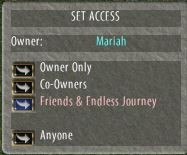 Adam, Billy, Charlie, Daniel, Eddie, Fred and George are characters on Atlantic belonging to UO Game Account ‘abcdefg’. All the spendable money belonging to these characters is in their Atlantic Currency Account: 20 million gp.

The player decides to transfer Adam to Catskills. Using character Adam he puts 5 million gp into Adam’s transfer account – total in the currency account is now 15 million gp. The rest of the ‘family’ have 0 gold in their transfer accounts. They’re not going anywhere.

Character Fred is in a guild with a group of other people, he wants to give his guild leader some funds to help run a guild event. (he is co-owned to the guild leader’s house). Player deposits 1million gp in Fred’s secure account. Total in currency account now 13,990,000. Fred goes to guild leader’s house where he is also co-owned to a wall safe. Opening the safe Fred sees his ‘secure account’ figure and deposits 600,000 in the safe. His secure account now has 400,000 in it which he can either return to the currency account (withdraw from secure account), leave where it is, or put in another safe either in his own home or any other home where he has either friend or co owner access to a wall safe.

Adam arrives on Catskills with his items in the bank, his pets in the stable and his sundries in his back pack. He joins Henry, Isaac, Jack, Kevin and Lester on that account. The Catskills currency account which stood at 14 million gp now has 19 million gp, Adam’s 5 million has been automatically added to the currency account of the new shard.

Silver was the currency used in the discontinued faction system, although some players still own some silver coins they no longer have any use other than decorative.