Introduced in publish 27, September 2004 the Leviathan significantly enhanced fishing for sunken treasure. This giant white kraken, summoned by casting Fabled Fishing nets in deep water, may reward player characters who battle and defeat it with a Minor artifact.

An undocumented additional drop appears to be a small colored box, locked and trapped and containing a small quantity of one of the Mondain’s Legacy generic ingredients; blight, corruption, muculent, putrefaction, scourge or taint. This box may be contained in the corpse of the leviathan or may drop at the feet of the net thrower. 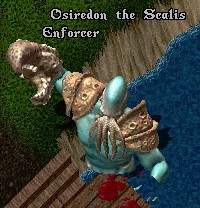 From publish 68, October 2010, fabled nets also have the potential to summon Osiredon the Scalis Enforcer, a much more daunting foe possessing high resistances, making him difficult to damage. Usually referred to as ‘Scalis’ rather than Osiredon, this creature will bombard opponents with parasitic eels and emit a tainted life force aura which can cause beneficial properties, such as life leech, to backfire and damage, instead of healing. The possibility of summoning this creature means it is best to cast fabled nets in the company of others. A number of artifacts are possible rewards for defeating this individual.

While both these creatures can be summoned from ships, and it is possible to damage Osiredon with cannon fire, the most popular locations for this activity are the docks at Buccaneer’s Den or Magincia.