Below are some simple macros,  and beyond them, some more complex examples using the ‘command-script’ option. 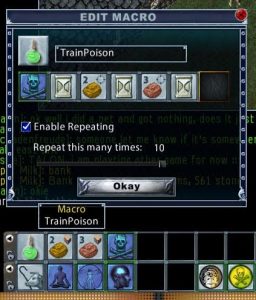 The image shows part of the hot bar, including the macro icon itself. Next to it are the Store Default Object 2 and Store Default Object 3 actions. SDO2 is used to remember the stack of poison potions to use, while SDO3 is used to remember the target, typically a weapon or piece of food. While training, I start with 21 bottles of poison, and a keg to refill them after two runs of ten. The reason for 21 instead of 20 is that the system will consider the poison stack the same if it never runs out. If all are used, the next poison stack will be different, and SDO2 will have to be used again before starting the macro. 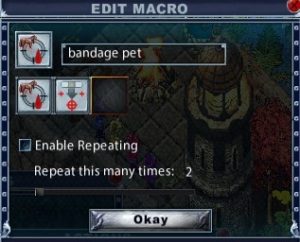 While it is possible to create a macro specifically for each pet, this version works for whatever pet you have with you, and if you have more than one, will target the one that is the most damaged. 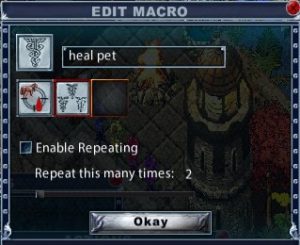 As with the bandage macro, it is possible to create individual macros for each pet.

Add as you find them each of the other ore types, setting the same ‘target = stored; Fire Beetle’ placing them before the final delay. 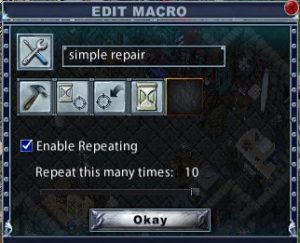 In text the macro is:

These four actions can be repeated in the macro if desired.

To use the macro:

Use the craft tool and create one repair deed using the crafting menu, then run the macro.

The command script action is found in the ‘other’ section of the actions menu. 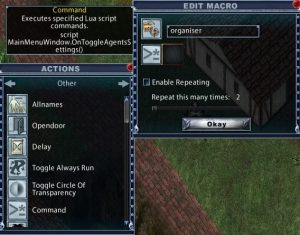 The command to enter for this macro is:

Harvesting from Plants, Commands by Khyro 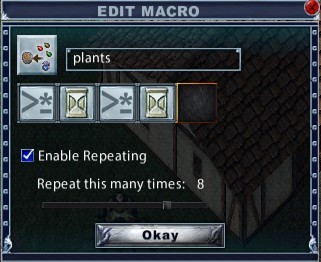 This macro will harvest all seeds and resources from a plant.  First open the plant’s gump to the reproduction/harvesting page.

The actions for this macro are 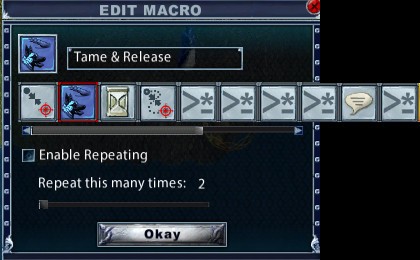 Actions for this macro are