You have placed your house and, if customised, built it. Now you must manage it. This is done through the house menu, through some spoken commands and through security settings on doors, teleporters and, when you come to furnish the house, on containers.

When you double click on the house sign a menu will open up. Each page gives information about your house and options that you can select to manage it. The first page is ‘information’ The two options at the bottom are seen on every page. They are ‘grant access’ and ‘revoke access’ if the house is private; ‘Banish’ and ‘Lift a Ban’ if the house is public. ‘Grant Access’ allows someone who is not listed as a friend or co-owner to enter the house. It does not override individual door and teleport settings. Select the option and then target the individual to whom you wish to apply it. Banish works in reverse, it removes a person from a public house and denies them access. The third page of the menu relates to storage and can be a little confusing. There are 3 ‘upgrades’ to basic storage, each increasing the basic storage amount by 20%; Mondains Legacy Expansion, High Seas Booster Pack and Housing and Bank Storage Upgrade Code. The account holding the house used in these examples has two of these, but not the third.

Maximum Secure Storage on this house is 3411, of that total 1705 may be ‘lockdowns’ ie decor.
currently 352 lockdowns are in use, leaving 1353 available, however the total available storage on the house is 1463. Being a private house, it has no vendors. If you built a custom house this page will be familiar, now to look at the other options on it other than ‘Customize This House’. The house is not taken into ‘edit mode’ to perform the changes listed below. The final page needs little explanation. Use this only to demolish the house or trade it to another player.

Having closed the house sign, spoken commands come into play, some of these are used frequently, many players create macros for them:

As a general rule you will want to use ‘secure’ for containers that you wish to take items in and out of. ‘Lock down’ is used for furniture or containers you wish to be able to open, but not remove items from. To remove an item from such a container the whole container has to be released, you can not release an item that is inside a locked down container.

Secure containers, and some house add-ons, will display a context menu when clicked with the left mouse button.

‘Relocate Container’ allows you to move a container without actually carrying it to the new location, selecting the option will give a targeting cursor, click the cursor where you wish the container to be placed. On doing so you will be prompted by the message ‘no longer secure’. Use the command listed above to secure or lock down the container in its new location.

‘Retrieve’ is a short cut for the ‘release’ command and will place the item into your backpack. It is advisable to use this if there is anyone in your house when you wish to release a locked down item. This option does not appear when you click on a door or teleporter, but the ‘Set Security’ option does. Clicking on Set Security opens a gump allowing you to choose who can access the container, item, door or teleporter in question. 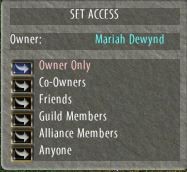 In the case of a secure container or other item which can be interacted with (books for example) the owner listed at the top of the gump is the character that locked it down. This need not be the house owner, but could be a co-owner. The security settings work as follows:

Character C on account 1, on same account as char A but in a different guild locked down a secure container and set it to guild access.
Character D on account 2 is the GM of the guild in which character C is a member and is friended to the house. She had no access to the container.
Conclusion: While for the purposes of customizing, securing and otherwise managing the house all characters on the account are classed as owners, for guild access only the character named on the sign is relevant.

Fred and George are both on the account that owns the house. Fred’s is the name on the sign.
Sid and Harry are on a different account