Halloween approaches, Khaldun, a remote dungeon in Lost Lands has been taken over by hostile forces. 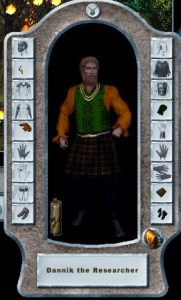 Following a similar formula to the three previous Halloween Events, Treasure of Sorcerer’s Dungeon, Treasures of Doom and Treasures of the Kotl City, an artifact trader has stationed himself outside the dungeon. In addition to trading Artifacts of the Cult, this kindly scientist will tithe gold for adventuring chivalrous knights, lock karma and restore life to distressed ghosts but before you can reach him, you will need  an official credential  as a member of the RBG Detective Branch obtained from the Going Gumshoe quest. 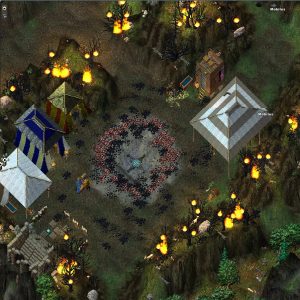 Immense power surges through the creatures in Khaldun! From whence it came remains to be discovered, but a means to combat this power has been found!

Normal weapons, spellbooks and musical instruments have no effect against this power, leave all your regular items at home. Only those crafted from materials infused with Caddelite have any effect.

Caddellite raw materials can be harvested thoughout The Lost Lands with special Caddellite infused harvesting tools sold by an NPC vendor outside Khaldun.

Caddellite raw materials can be obtained via mining, lumberjacking and fishing.

Caddellite Crafting can only be performed at the Khaldun Camp site. The camp site has a full complement of crafting and adventuring services. Crafting away from the camp will result in items not being caddellite infused, even if made with caddellite infused resources.

Metal weapons can be crafted with Caddellite infused ingots for melee battle against the creatures in Khaldun.

Caddellite infused boards can be used to make wooden weapons & musical instruments while caddellite infused bark fragments can be cooked into  infused woodpulp and then turned by scribes into infused blank scrolls, 5 scrolls from each woodpulp, with which to write spellbooks; for melee, ranged and magic battle against the creatures of Khaldun.

Caddellite infused weapons can be imbued or reforged, Caddellite does not count towards imbuing weight.

Artifacts of the Cult will appear in adventurers’ packs as they battle the inhabitants of the dungeon and the researcher will exchange these for a variety of items in his inventory; figures in brackets are the number of artifacts the trader requires in exchange:

Throughout Khaldun these treasure troves can be found to reward the discerning rogue with a number of premium rewards including,

Khal Ankur and the mysterious forces summoning him have established Khaldun as the center of their power. Battle against waves of enemies to claim valuable “Artifacts of the Cult”. Defeat their leader for a chance of receiving a halloween costume.

Felucca Only – during the duration of the Treasures of Khaldun, a bonus to the level of Powerscroll drops will be available – guaranteeing up to 4 Legendary powerscrolls.

Also spawning in this area, but not part of the champion spawn are Ancient Lich, Bone Magi, Skeletal Mages and Zealots of Khaldun (Knights and Summoners)