Town Criers throughout Sosaria have news

Royal City Celebrates Gargish Art
Travelers from near and far are enjoying a new art exhibit on display in the Royal City. Queen Zhah herself has spoken of how much she enjoys looking at the exhibit from her balcony at the rear of the Royal Palace! The exhibit showcases Gargish Art and the centerpiece, an ode to the Gargish breakthrough of Imbuing, is a masterfully carved totem that is leaving onlookers speechless! Speaking to one guest, The Town Cryer learned these exhibits are a true testament to the abilities and gifts of the Gargish. The exhibit is open daily and is free to the public 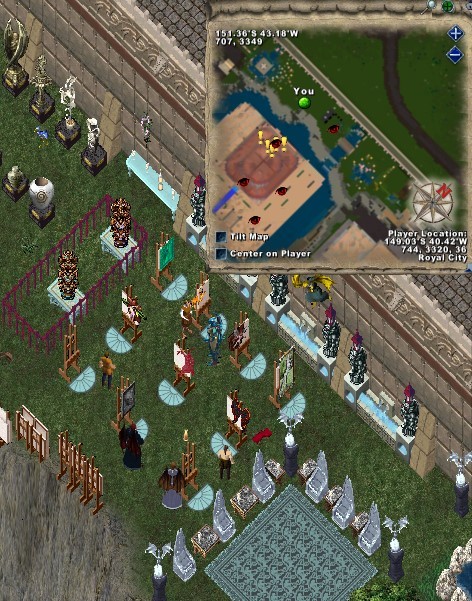 There seems to be much excitement, many people chatting. Engage some in conversation by greeting them.

Despicable isn’t it? They fawn over imbuing like it is some kind of remarkable breakthrough. The true breakthroughs are in ALCHEMY!

The true masters of arcane know alchemy is what can bring life from death, cure from poison, and strength from weakness. It is only the ALCHEMIST that can do these things

I have studied alchemy for years and know its true power. Just recently alchemists have managed to harness the power of transmogrify magics between items using alchemy the GARGISH can’t even do that.

Look as that TOTEM, peculiar isn’t it? Doesn’t even look like a gargoyle! Merely an artists representation of their own perceived self grandeur. Would never see a true ARTISAN do anything so bold.

Artisans – Hah! Fawn for them and their trinkets like the others do, not me! I am a master of the arcane. Careful research and study has lead me to mastering what I know. I’ve had enough of this already. *Hrmph*

What a beautiful totem. Just wonder what has taken so long, the Gargish have been the master of ARTIFACTS for years now!

Ya, that’s my game. I can find just about any artifact in the realm. You mean you haven’t heard of me? I find that hard to BELIEVE!

It’s the honest truth! You mention Zeamina anywhere around the ORCHID and you’ll hear about how great an Artifact Hunter I am – legendary they’d say!

Ya, you ever been? It’s great – the most comfortable place and wonderful service you can find in Buccaneer’s Den. The took the old BATHS and really spruced the place up!

You know, the Buccaneer’s Den baths. Was a ratty place, but now it’s real classy. Might head over there myself after this, amazing what the new OWNERS have done.

A mother daughter pair, orcs. *Laughs* What? Afraid of orcs? Don’t be – the service is great and the drinks are strong! Should take a visit some time! 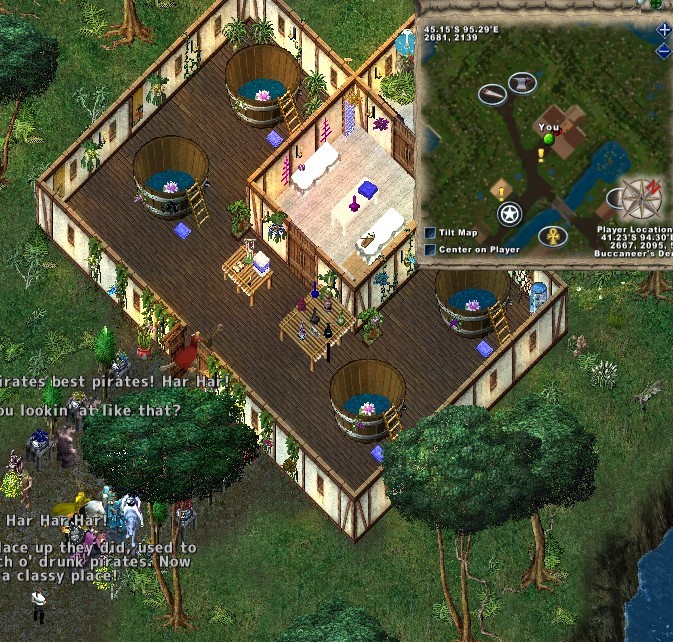 There have been some big changes to the old bath house, speak to the manager

Welcome to the ORCHID!

The newly renovated Buc’s baths, with lots of fresh orchids from the Black Market, and we feature lots of AMENITIES!

Whether ye be fer relaxation or recreation our new OWNERS have spared no expense!

The mother daughter pair of GHORZA AND DURA are the proprietors here, they’ve spared no expense!

Been a while since we seen them, I’m just the manager. Hopefully they come back soon, we need fresh orchids already!

That friendly gargoyle is here too, what has she to tell you?

Quest – A Favor for the Gargoyle
Took my advice and came to the Orchid did ya? Smart! I love it here, do you see this place? It’s so relaxing and luxurious, even for orcs! Listen, I’m gonna take some much needed rest and relaxation but if you are looking to make a score I hear the Black Market has Hook’s Map! Bring me one of them and I’ll definitely make it worth your time! In the meantime, have you thought about taking a steam? You can afford it right?

The map has a cost of 150,000 Doubloons from the Black Market Merchant. Mark it as a quest item and return to the bath house

Ha! Didn’t think you’d pull this off! Maybe I misjudged your thirst for artifacts. Well thanks for this, oh ya I guess I should reward you. The treasure coordinates are 157o, 41’N by 56o31’E. But good luck beating me there, I’m a famed artifact hunter after all! And you, well you’re you. *laughs*

Oh, here’s this for your troubles as well! Probably be worth something one day. 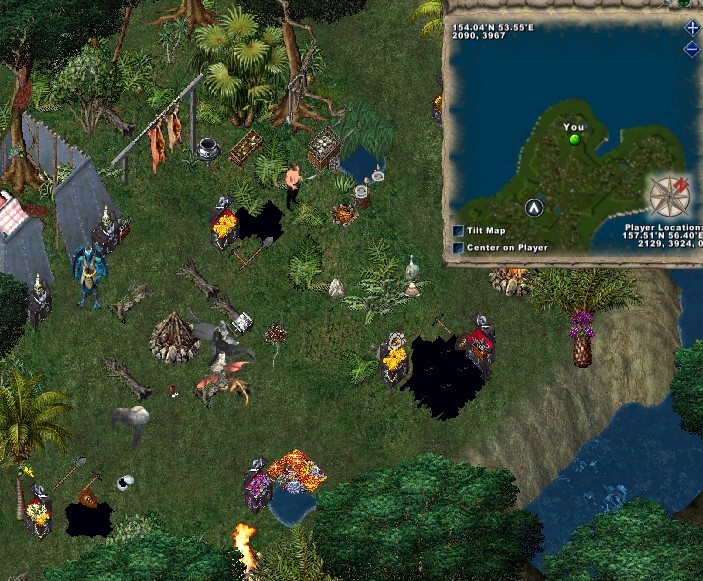 Of course, Zeamina got there before you

Hey! You again, didn’t think I’d see you again. Oh! thanks for the TREASURE MAP! This was a great haul!

I mean, I took all the good stuff but there are some TRINKETS over there you can have … I guess.

They could be worth something, or not. I dunno. Best bet is to take them to my buddy ARTURIO over in Moonglow

Ya, he’s always good for a trade or two. He’s at the Scholar’s Goods in Moonglow. 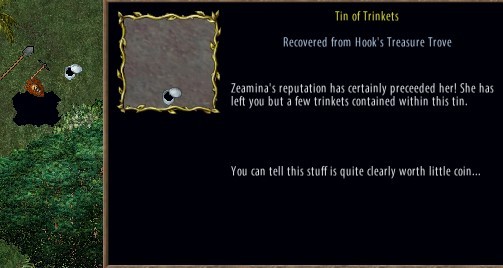 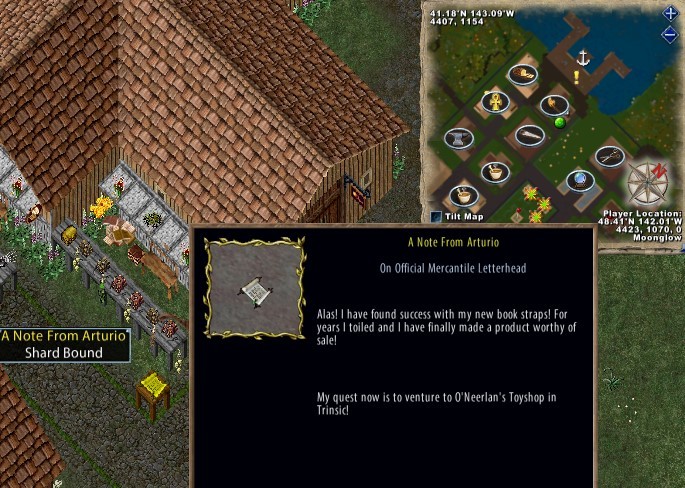 Visiting Moonglow, there’s no sign of Arturio, just a note left behind, best follow him to Trinsic then 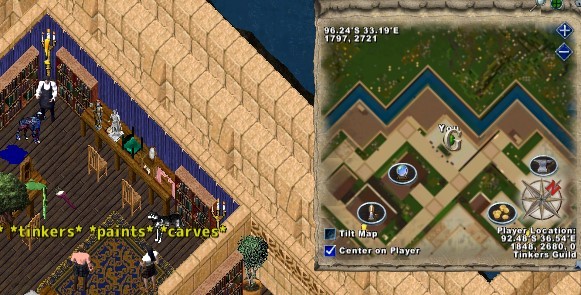 Hello there, welcome to O’Neerlans TOYSHOP

Yes, we specialize in miniaturised figurines of all manner of things. My FATHER has had this shop in our family for quite some time.

My father is Thomas O’Neerlena. Mom and him met some time ago and he decided to move here for her. They were in LOVE.

I hope to one day fall in love, but alas … I have yet to meet the right person. Father says that we must focus on WORK right now.

We have been very busy ever since the DOGS arrived at the Castle. Everyone seems to want their very own, especially Ryder.

Yes, the Royal Kennel Society has gifted King Blackthorn with some puppies. They are quite adorable. You should visit the castle and say hello to them. I’m told they have their own Castle! 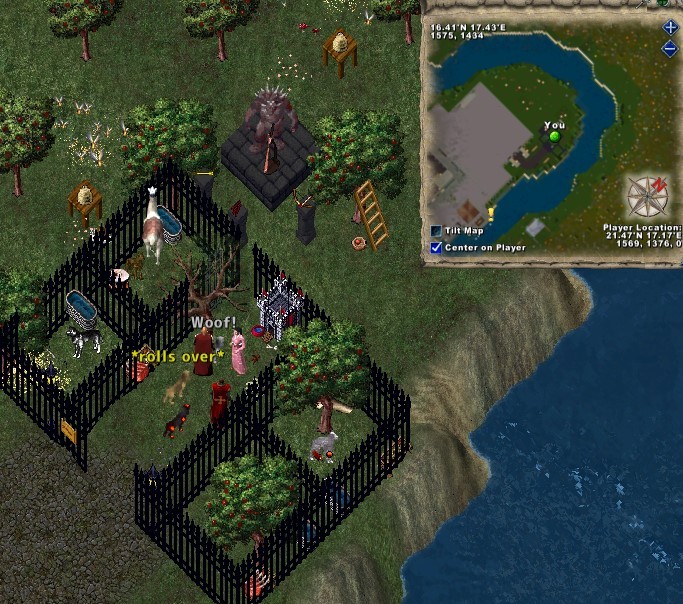 Hello there citizen! Have you come to see the puppies?

Ah yes, everyone has visited the castle to see the puppies. They are quite popular, especially RYDER

Seems to be everyone’s favorite. She loves it when you call her name. Seems we have some emissaries from TOKUNO at the castle today as well.

Yes, it appears they have come to request aid in the case of a missing artisan called YUKIO

I must admit I don’t know much other than by reputation. Her reputation is that she is very skilled at creating SOULSTONES

The magical monoliths that allow the transfer of great knowledge. Remarkable objects I’ve not had nearly enough chance to study. One day, perhaps, I shall.

Yukio has gone MISSING and we need assistance to find her. She was set to release a new SOULSTONE but has not been seen for some time

Her STUDIO has been ransacked and the guards are on scene. We can only hope she is found soon.

Yes, Yukio is the greatest soulstone artisan to have ever lived! She was set to release a new variety just before her disappearance! 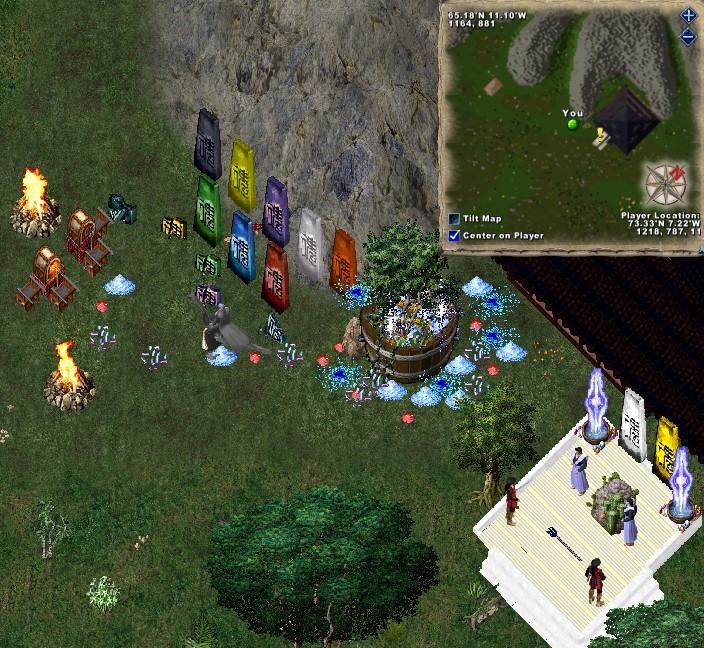 I am glad you were able to heed the call of the emissary mission to Britain. Are you here to help find YUKIO?

Her studio has been ransacked, and it seems any evidence of her disappearance has been spread throughout the lands by SCAVENGERS

If we have any hope of finding Yukio we need to recover the evidence, speak to the Guard Captain to assist in the recovery 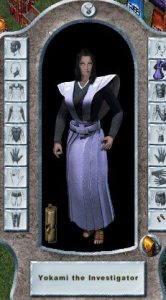 Quest: Where is Yukio

Yukio, the famed Tokunese Artisan known for abilities as a soulstone glassblower has gone missing! her studio is destroyed and you have been asked personally by King Blackthorn to assist the Tokonese in uncovering the circumstances surrounding her disappearance!

You have assisted in recovering some evidence surrounding Yukio’s disappearance. We are one step closer to finding out. Where is Yukio?