Travellers have notified of a strange new tower that has appeared in Ter Mur. On investigation it appears to belong to Holmes the Alchemist, last seen at the Gargish Art Exhibition. 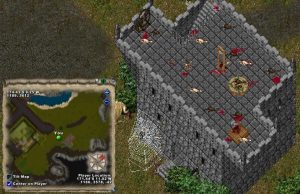 Inside the tower are strange items, Holmes himself and, apparently locked in a back room, Yukio the Artisan 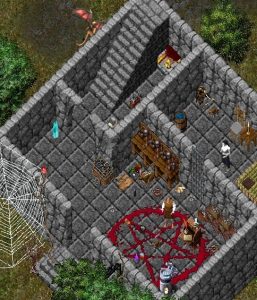 (greetings)
Managed to find me here in Ter Mur did you? Hah. Hah. Hah. That’s exactly what I wanted, more feed for my CREATION
(creation)
Some may see it as an abomination, but I see it as a perfect marriage between clockwork and organic. A testament to my SKILL
(skill)
That’s right, the gargish think they are so powerful with their skills in imbuing but the real power is in ALCHEMY
(alchemy)
Alchemy has done what will no doubt bring you to your early demise. A creation of unmatched power and grace. Now you will pay for your meddling!

Yukio speaks to you when you enter the back room, but does not appear to respond to greetings or questions

Help!
I have been trapped, watch out for his abomination! It is a terror! You will never get away with this Holmes!

Also in the tower are some weird looking rabbits, of the various furnishings in the room the most promising of answers is the writing desk. Examining it (clicking) you receive a Book of Lore,

however it has no pages.

The abomination has become the champion of a spawn in the nearby village, defeat him and his minions, but beware, the usual residents of the village are not taking kindly to the invasion. 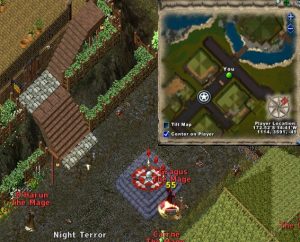 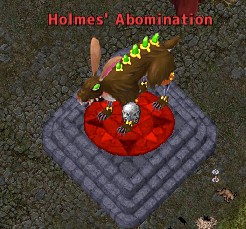 As you work the spawn you may discover some of the missing pages for your Book of Lore. The Abomination’s minions are believed to be carrying pages one to thirteen, these will appear in your back pack if you are lucky enough to kill one of those carrying them. 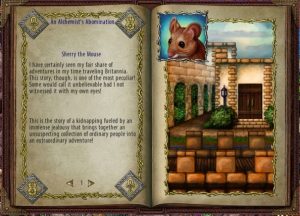 Defeating the champion you may receive a bracelet, the Alchemist’s Abomination

, this item is one drop per account/shard, properties are: