Having defeated the abomination, you may find in a far corner of the village: 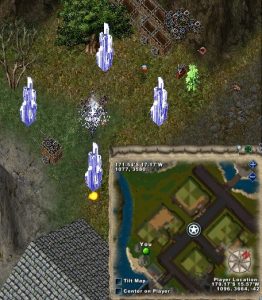 The sparkle in the center appears to have some rabbit fur trapped in it. Stepping through it you find yourself in an underground cavern. Interestingly the book on a table there is titled ‘Jailbreak for Dummies’. Also in the cavern is Yukio, last seen in Holmes’ house? She can hardly be in two places at once, so which is the real Yukio? 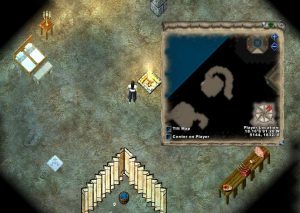 You have come to my aid, thank you! I am forever grateful for freeing me from HOLMES
(holmes)
He is a disturbed man, always ranting about gargoyles and daemons in his head. I am thankful you destroyed his ABOMINATION
(abomination)
I watched as he experimented to bring life to clockwork parts. He insisted I build a SOULSTONE for him to assist in his work.
(soulstone)
A soulstone can store a life force and transger it between beings but holmes was after more POWER than even I could create
(power)
The only artifact strone enough is the stone of CASTAMBRE
(castambre)
That’s right, a stone from which the Tree of Life grows. Holmes abducted ORCS to try and mine it for him.
(orcs)
A mother and daughter were captured by Holmes. I have heard their cries for help in the ether, you must RESCUE them.
(rescue)
I was able to craft a rudimentary teleporter, hopefully you can use it to get to them and free them from Holmes!

The teleporter Yukio has made can be seen to the south, stepping on it leads you to another cavern. Ghorza begins to speak to you without waiting for your greeting. 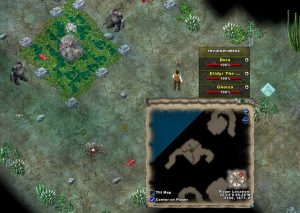 Finally! we can get out of this hole and go back to the Orchid! I hope you are here to rescue us!
(orchid)
That’s right, the Orchid in Buc’s Den. We own it. Holmes’ thugs threatened to torch the place if we didn’t help him get the Stone of CASTAMBRE.
(castambre)
This rock here has some kind of life properties, I don’t know about all that. *As you continue your conversation a FIGURE emerges from the ether*
(figure)
What the?! Did you see that? Where did he come from?! I can’t wait to get out of here, enough with these dark magics!

(greetings)
*The figure coughs a bit and focuses his attention on you* How LONG has it been?
(long)
I am Elidyr, a Spellweaver. I was doing experiments with WILDFIRE and I inadvertently cast myself into a STONE that found itself inside a chest.
(wildfire)
Wildfire is a powerful element of Spellweaving. It summons the power of fire to both cause DESTRUCTION and rebirth. I was researching it for a powerful noble. That was a long time ago though.
(destruction)
Yes, Wildfire can cause great destruction if it falls into the wrong hands…
(stone)
Yes, I know, it’s very silly. I didn’t mean to but there I was. Just a pebble in a tin of trinkets. Quite the travels I’ve had; I’ve been in Hook’s Treasure Chest for quite some time. Thank you for freeing me!

As you have been chatting to Elidyr have you noticed a red sparkle south of you? Step through it? 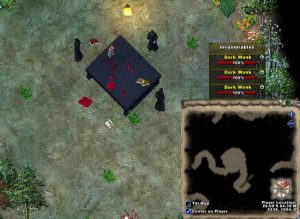 The dark monks ignore any attempt to communicate but talk among themselves.
Dark Monks
By my blood the wildfire burns
With wildfire there will be no stopping our will
May the heart of Casambre burn a path across this world
Kal Vas Xen Corp!