We are pleased to announce the second Test Center release of Jolly Roger will be available today after 4pm ET!  Jolly Roger is the final in our High Seas themed content updates for the year and we are excited to bring you a host of updates in this latest release including,

This is only a small part of what’s to come in Jolly Roger and we look forward to hearing your constructive feedback as we work through the public testing process.  Please be sure to check out the publish notes for the full list of updates, and participate on the UO Forum in the latest discussions.

This release includes a mandatory client patch, please make sure you patch up before accessing any shard.

We are pleased to announce the first Test Center release of Jolly Roger will be available today after 4pm ET!  Jolly Roger is the final in our High Seas themed content updates for the year and we are excited to bring you a host of updates to favorites including,

This is only a small part of what’s to come in Jolly Roger and we look forward to hearing your constructive feedback as we work through the public testing process.  Please be sure to check out the publish notes for the full list of updates, and participate on the UO Forum in the latest discussions.

Please be sure to patch up to the latest client before checking out any of the new content on TC1!

We will also be wiping TC1 in preparation for the upcomming Keep Design contest, keep an eye on UO.com for important dates.

Tomorrow morning at approx 7 am ET we will be preforming maintenance on several of our warehouses.  This means that for approx an hour the log in servers , the character transfer warehouse, the In game store, and the housing warehouse will be down.

We appreciate your understanding in this matter.

As we continue the story of Forsaken Foes, we invite you to sit back and enjoy The Mortal Game.

It bothered the king that the pieces did not match. His side was made from obsidian, beautifully sculpted into the expected shapes. The crafter had taken more liberty with red’s side, giving extra details to each of the bloodwood pieces. The knights were decorated with curved swords, and the bishops had gargoyle features. The towers were topped with sharp points that reminded Blackthorn of wolf claws. The board and pieces had been a gift from Lord Batlin when the king suggested they play this game.

The king steepled his fingers and examined the board. His opponent was aggressive; Blackthorn had already lost much dealing with Batlin’s knights. Still, the king had retaken initiative when he sent his own knights into the enemy ranks. As long as there were no other surprises…

The gourd-festooned sloop slammed into the larger merchant galleon, and zombies with pumpkin heads scrambled to board the other ship.

The zombie crew started killing its counterpart and dragged the bodies back to their ship. A living sailor lopped the head off one of the abominations, but the animate flesh kept moving until the rotting hands were around the sailor’s throat.

Batlin smiled as his claw-topped rook captured a pawn in black’s ranks and put Blackthorn’s king in check. Blackthorn’s own rook was trapped and would soon be captured, and many of his defenders were scattered or busy on other parts of the board. “Let me know if you wish to resign.”

Blackthorn shook his head and moved a bishop to defend the king. The diagonal movement of bishops reminded him of mages, always moving at strange angles to everything else.

The mage had taken extra care with his binding circle, even using expensive silver-dust chalk. Daemonology was frowned on even here in Moonglow, so he had taken these precautions.

The mage began the ritual to summon and control a demon. Halfway into the delicate casting, his connection to the magic in the room broke. The failed spell started a fire, and the creature escaped the binding circle. As demonic claws tore into the mage, he was still puzzling out what had happened.

Batlin knocked over his own king with a finger. “An excellent game. Perhaps we will play again.”

Blackthorn studied the final board. “I’m sure we will.”

“From your reputation, I expected a more lively game or at least a nearly empty endgame. It seemed at times you were more focused on preventing the capture of your pawns than protecting your king.”

“I have a certain affection for pawns. After all, we are all just pawns in this life.”

In the ethereal void, the Time Lord strained against his chains as hundreds of spirits tore apart the shrine around him, directed by a voice in the darkness.

Due to the upcoming holiday  the  meet and greet scheduled on Origin October 14th @ 9 pm ET  needs to be moved to October 15th @ 9 pm ET.   Thank you for your understanding and we will see you then.

As we continue the story of Forsaken Foes, we invite you to sit back and enjoy October Shadows

The hallway held a macabre mockery of various holidays. An indoor garden of gourds and nightshade grew pumpkins already carved with sinister glowing runes. Brightly colored eggs filled with bees twitched in a basket guarded by a rabid rabbit. A mounted reindeer skull decorated with pine garland tried to bite the ranger as he walked past. Shamino tightened his grip on his sword and stepped around the various horrors.

When his initial search for the Serpent Amulet had come to a dead end, Shamino tracked a powerful source of necromancy here. He believed it was responsible for upsetting the spirits across Britannia.

At the end of the hall, a man wearing a pumpkin on his head sat on a throne of glass candy canes. “Welcome, Shamino. You may call me Jack.”

Shamino asked, “Have we met before?”

“The twins told me about you. Twins… so lucky to have someone who understands you and who can donate blood should the need arise. You don’t have a twin, do you?”

Shamino shook his head and raised his sword.

“A pity. I would have liked a matched set. I suppose conversations about kith and kin shall have to wait.”

“What are you planning?”

“The twins helped me hear my inner voice. That voice has told me so much.” Jack poured a pouch of grave dust into his hand.

Shamino swung his sword down on the necromancer. Jack disappeared and the strike shattered the glass throne. Jack appeared on the other side of Shamino. His skeletal fingers sank into the ranger’s flesh. Shamino had never felt anything so painful. He tried to raise his sword again, but felt nothing. Shamino looked down and saw his body crumpled on the ground.

Jack laughed at the disembodied ranger. “What shall I sew your soul into? My screaming ship could use more crew.”

Shamino knew he had one chance to avoid becoming another of Jack’s abominations. He focused on escape, sacrificing a fragment of his soul to wrench free from the deranged necromancer’s grip. Shamino desperately fled into the grey between life and death. He saw a great glowing beacon, and willed his spirit toward it. Getting closer, the light kept pulling on his mana and memories, and Shamino fought, grasping at whatever he could hold.

The ranger’s spirit clung to the side of the Well of Souls, waiting to be found.

We are aware the Europa shard has been experiencing instability.  We are investigating the issue and appreciate your patience while we work towards a resolution.

Get ready for the next batch of Forsaken Foes rewards that are available today! 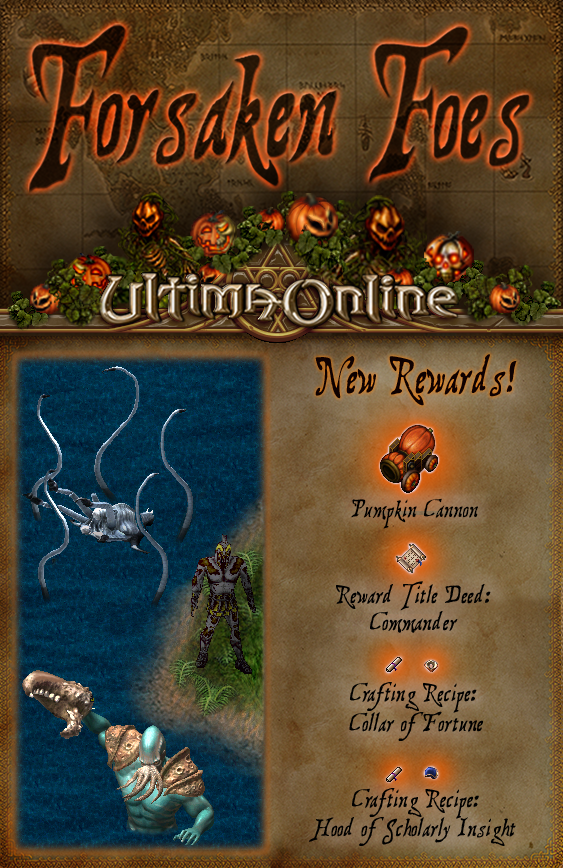 As of each shard’s normal maintenance on 9/25/2019 the following hotfixes have been deployed,