With the runes of Virtue destroyed the Shrines of Virtue quickly fell to the Fellowship menace. The only hope to rebuild them is to restore the protective power the runes once provided. You encounter the ghost of the famed tinker Julia at the mining camp east of Minoc. She has uncovered a way to rekindle that protection and allow the Shrines to be rebuilt. In order to assist you must accomplish two goals.

First you must collect a vial of blood from where Julia was slain. in the woods just east of the nearby bridge north of Vesper and east of Minoc, to reconnect her spirit to this plane.

Second you must obtain charms from 7 other companions. With their help the shrines can be rebuilt. 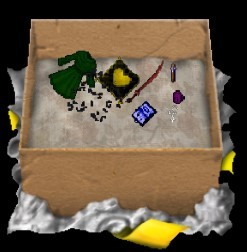 Mariah is overcome with insanity from the tetrahedron and is resting at a healer in Moonglow. You are told by the healers that Mariah’s condition is dire. After utilizing mana corrupted by the tetrahedron, she has been overcome with insane and unintelligible ramblings. The healers tell you her only hope for a cure is salve made from compassion sage carried by Controllers deep in exodus dungeon and raw ginseng growing in the far northern forests of the continent, close to Sacrifice shrine. Controllers are also found on the pyramid above the dungeon, in and around Mistas and at the mining camp close to Volcanic Lair.  It is strongly advised to obtain the compassion sage first, raw ginseng, being a living plant, is inclined to wilt and has a useable life of only 3 days, after which it will crumble and disappear. You may replace the plant if it decays, but only once.

Iolo is tending to those in need at the poorhouses South of Britain near the Trinsic road. He greets travellers thus: Greetings friend. Welcome to the poorhouse. Here we offer what we can to Britannia’s most needy. We don’t have much, but what we do comes from the compassionate donations of citizens like yourself. Can you help us? Any supplies would go a long way to making those who need our help more comfortable. Even simple things like bread, milk and shoes can go a long way to easing the suffering of those who have nothing.
Bread, milk and shoes? Easily found in Britain’s shops by a compassionate traveller with a few coins in his pocket.

Geoffrey is coordinating response to the fellowship from the Hand of Death, warriors guild hall on the south bank of the main Jhelom island He greets you “We’ve got those Fellowship killsers on the run! Ha! I hope you are here to join the fight because we can’t relent for even a moment! Reports suggest the Fellowship may be attempting to train dragons down in Destard to launch a full scale attack against Britannia! We’ve got to stop them! Head down to Destard and thin the herd to keep the Fellowship from building a dragon army we won’t be able to stop!” 40 drakes, 20 dragons and 5 greater dragons are what Geoffrey considers to be enough ‘thinning’ for the purpose.

Jaana is defending those accused of theft at the Court of Truth in Yew. There has been a break in at the Yew Winery. Those who stand accused cling to claims of innocence as mere fellowship pawns. Jaana has asked for your help in clearing the names of the accused. You are to go to the Yew Winery and uncover evidence of the true nature of the crime and return to Jaana who may present the evidence to the court in an effort to clear the names of those whom she represents. A little judicious searching with ctrl/shift should solve the problem.

You meet Dupre at the Keg and Anchor in Trinsic where he is telling stories. He smiles as he leans on the bar. “No doubt the realm is in turmoil… with the Shrines destroyed virtue is sapped each day. Still Honorable combat exists between those courageous and truthful to the are to practice it. A daemon called Accadion has challenged anyone brave enough to venture into Dungeon Shame and prove their worth in combat. Are ye up to the task? Upsetting a daemon is the last thing we need at a time like this…” An Unbound Energy Vortex is the foe you are expected to defeat. Teaming up with a few fellow questors may be the best tactic. 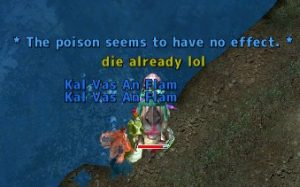 You come upon a statue of the Ranger King Shamino outside the ranger’s guild in Skara Brae. Immediately your spirit is one with the statue, you know what must be done. A ranger has fallen deep inside Hythloth. Until the spirit of the ranger can be returned to the ethereal void there is great unrest in the spirit world. Without a word being spoken you know that you must find the fallen ranger deep inside Hythloth and return to Shamino’s statue. All that remains of the ill fated ranger is a pile of bones beside a pillar at the foot of a staircase. Note: the item recovered from the fallen ranger is the same as that required by Julia, but it must be marked as a quest item and returned to Shamino before being presented to Julia.

Katrina is helping some simple sheep farmers in New Magincia, near the tailor shop. You have been approached by Katrina who tells you of a group of sheep farmers who are being tormented by Troglodytes from the Painted Caves. She has had trouble getting the guards to take her requests for assistance seriously, especially in the face of the greater perils that threaten Britannia. She asks if you will humble yourself before the farmers and assist them without the promise of payment so their livelihood will not be at stake. 50 is a goodly number of troglodytes to vanquish, but not too much to ask?