Vanity mounts were first introduced using that terminology for the 16th anniversary when unusually colored horses were included as anniversary gifts. The already existing Peerless drops, Grizzled Mare and Paroxysmus Swamp Dragon are also considered to be Vanity Mounts

The Quest Exterminating the Infestations has the potential reward, Sakkhran Bird of Prey, a further Vanity Mount. 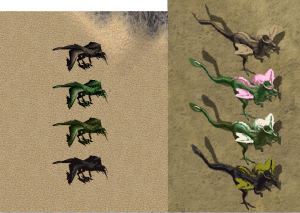 These items, initially, are in statue form. When double-clicked the statue transforms into a rideable mount, instantly bonded to the character and needing to be fed and stabled as you would any other mount. It cannot be restored to its statue form.

More exotic vanity mounts are purchasable from the Ultima Store at a cost of 1000 sovereigns. Currently available are Eowmu,

a unicorn with rainbow hued mane and tail, Skeletal Cat,

Vanity mounts occupy one follower slot and have no special abilities or properties, but can gain such through the use of Animal Training. They can be resurrected without veterinary or animal lore skill when in consensual-PvP rulesets. (currently only active in Trammel ruleset)