A New Shard for a New Legacy

The Town Cryer has learned that a mysterious creature has been spotted roaming the streets of a major Britannian City!  When attempts were made to apprehend the creature by the Royal Guard the creature quickly vanished!  Only a rough sketch of the location was available at the time of printing (view the full image on UO.com).  Citizens are advised to keep a vigilant lookout as they carry out their daily business! 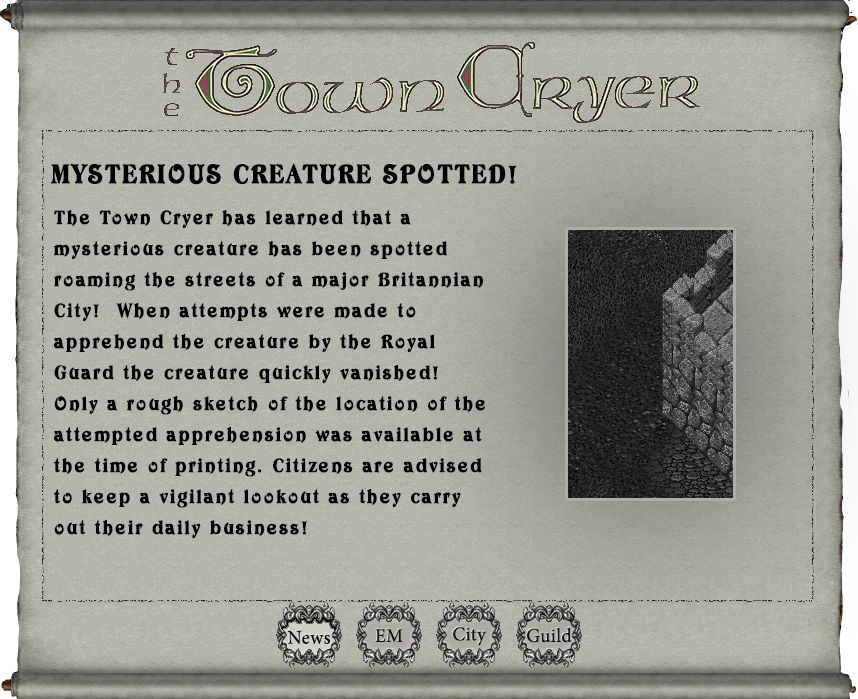 We are pleased to announce that as of each shard’s normal maintenance beginning March 16, 2021 Publish 110 will be deployed worldwide.

Vendor search will be unavailable beginning today, March 15, 2021 @ 4pm ET.  Vendor will return once all shards have been published, approximately March 16th, 2021 at 1pm ET.

Publish 110 includes a host of new features as well as support for our upcoming  events beginning with A Pirate’s Life and following up with A Soulless Seduction in April!

Be sure to check out the publish notes for full details.

Be sure to patch up your client before accessing any production shard.  We thank everyone for their feedback during the Publish 110 release cycle!

We are pleased to announce with each shard’s regularly scheduled maintenance, beginning on March 10, 2021, Origin, Izumo, and Baja will be updated with the latest release of Publish 110.  Please head over to the wiki and check out the full publish notes.

Please also note that vendor search will be down on these 3 until Publish 110 is released WW.

We are pleased to announce we have updated Test Center 1 with the latest release of Publish 110.  Please head over to the wiki and check out the full publish notes.

Just a heads up that it appears the issue causing the shards to crash has been correctly.  Thank you for your patience while we got this resolved.

We are aware of the issue that we currently have with the West Coast Shards going down.  We are working with Amazon to resolve this issue and will keep you informed when we have any information.

Thank you for your patience!

Have a wonderful day,

To support the Valentine’s Day gifts we will be releasing a client patch and server publish this morning.  Please make sure you check out your Event Moderator posting for the time and place you might be able participate in the events leading up to these gifts.  Gifts will become available beginning February 12,  2021. This year your gift will be given out depending on your karma, so choose your actions wisely!

The Developer Meet and Greet on Yamato tomorrow morning has been cancelled.  We are sorry for any inconvenience this has caused and will be rescheduling at a later date.

Greetings Everyone,
I am looking to 3 creative friendly people that would like to join the Event Moderator team.  Please read the following and if you think this is an adventure you would like to join please contact me at Mesanna@broadsword.com.  Please answer the following questions and I will contact you to set up an interview.
If you are interested in joining the Event Moderator Team, I have a position open on the following shards:
Origin
Legends
Oceania
Atlantic
Please understand you will be unable to work and play on the same shard.
Thank you and I look forward to hearing from you,
Bonnie “Mesanna” Armstrong
UO Producer

We know we told everyone the maintenance would be finished by 2 pm today but due to unforeseen issues we are having extend the completion of maintenance to 7 pm this evening.  We are so sorry for the inconvenience and thank you in advance for your patience.

We are under going maintenance on the following data bases and should be completed by 2 pm ET today.

Account Center which means code redemption is not working.

Forums – Since the Account Center is down this will not be working properly.

If you are having issues with paging a GM please be patient with us during this maintenance.

Thank you for your patience and we will have these systems up and running as soon as possible.

We are pleased to announce our next event, Tears of the Ice Dragon, will be live after each shard’s regularly scheduled maintenance beginning December 8, 2020 at 12:01 AM ET.  The points from this event will expire on January 15, 2021 at 11:59 ET.  For those brave enough to venture into the Ice Dungeon to slay the frozen creatures within will find great treasures to be had!

To accompany this event we are also happy to present, The Locket of Winter

The winds screamed as they raced past the tall mountain peak. Even protected from the worst of it by magic, the climber felt the numb of deep winter. Still, Drogeni continued her climb.

At the top, the mage dropped her pack and removed what she needed for the ritual. Drogeni opened a delicate silver locket and placed it on the snow. It was the work of a decade’s research and a year’s enchantment.

Standing tall against the howling winds, Drogeni began to sing. The anthem was filled with magic, inviting the winter itself to dance. The winds shifted, and the frost started to collect into swirling shapes: wing, tooth, and scale. As Drogeni continued her song, the enchantment bound the winter into the form of two dragons.

In the final verse, the dragons took their first breath in this world and let out a howling cry. The mountains were filled with notes of rapture as the pair joined the mage’s song.

When the song finished, Drogeni closed the locket, and the dragons vanished. The ice dragons lived inside the bespelled world of the locket, protected from the springs and summers to come.

Years passed, and Drogeni reached the end of her life. A man she cared for had gone off seeking immortality, but that wasn’t for her. One life was enough. Her family were her dragons, and they had been fruitful during the many winters since she first opened the locket.

Withdrawing from the world, the mage moved into a cottage at the base of a glacier, so the dragon brood could always be free. Each year brought more hatchlings.

While her magic kept them alive, the dragons returned the favor. They brought her venison from their hunts and kept her cottage safe from wolves. Drogeni would collect the blood spilled by the nipping games of the young dragons to make salves for her arthritic limbs. The dragons’ songs would sing the old mage to sleep.

Still, even cared for and loved, one day, Drogeni closed the Locket of Winter for the last time.

Each night, the thief dreamt of losing all his ill-gotten wealth. Sometimes, a great chasm would open to swallow his treasure horde. Other nights, he was running through the snow, arms filled with coins, jewelry, and magic weapons, only to have the wind snatch all of them away. Purlonio could not allow this to happen.

The thief had burgled a mage with a reputation for collecting powerful artifacts, hoping one of them could protect his treasure. Purlonio moved his stash to the frozen caves north of Wrong prison. It was far from the city’s bustle and avoided by people like him.

The thief decided to start with the smallest of the stolen baubles and work his way up. Picking up a silver locket, Purlonio waved it in the air. When nothing happened, the thief pried it open with a knife.

There came a great cold and terrifying roar from the locket, and the thief threw it across the cavern. Frost and snow billowed from the silver trinket, and Purlonio could see monstrous forms in the chaos. The terrified thief fled.

The locket was open, and the winter was free.