Found in the ‘targeting’ section of the ‘actions’ menu and used in macros, this function is a boon to many characters. Its use is governed by the tool type.

More obviously used to mine ore, placing a shovel or pick in the box also gives the miner the option to mine sand, provided the appropriate book has been purchased from Ter Mur and read by the miner.  Less obviously it also gives characters undertaking the quest The Witches Apprentice the option to dig graves for Bones Buried In Hallowed Ground. Below is an example showing how the action could be used in a macro to mine ore.

The macro would need to be built over time, as the miner found the ore samples to place in it. Each ore sample in this example has been set ‘target stored’ where the stored target is the miner’s fire beetle. The image has been edited to show the entire length of the macro in one image.

Placing any kind of axe or a hatchet into the box gives the lumberjack the option to target wood – ie the nearest tree. Lumberjacking will not work if circle of transparency is turned on.  The red mushroom option applies, like the ‘digging graves’ option above, to characters undertaking the Witches Apprentice quest.  Below is an example showing how the action could be used in a macro to chop logs.

Like the mining macro, the image has been edited to show the entire macro in one image. The macro will need to be built over time as the character finds each log type, using the ‘target by item type’ action.  In this instance the ‘repeat’ function is set to 3 instead of the more used 10. This is because of the weight of logs in the character’s backpack, especially if in Felucca.

Placing a fishing pole in the box gives the fisherman the option to fish in water, or if in the Stygian Abyss in pursuit of a lava fish, in lava. Below is an example showing how the action could be used in a macro to catch fish, either while stationary, while sailing a plotted course on a map or by command to the pilot/tillerman. 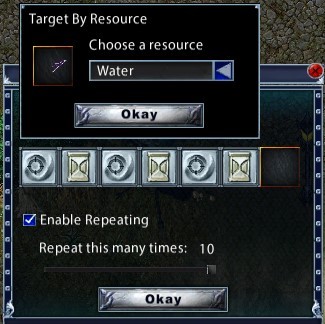 Delays in this case are 8.0.  With the settings shown this macro will harvest 300 stones of fish (more if any special fish are caught), no provision is made in the macro for removing fish from the character’s back pack, it is suggested that the player run and ‘organiser’ agent to move the fish to the ship’s hold or a pack animal at the end of the macro before re-running it.